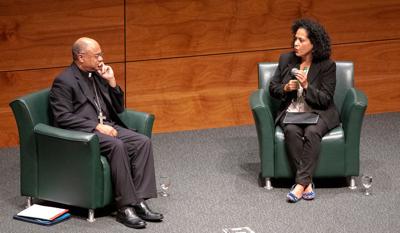 Most Reverend Shelton J. Fabre and María Teresa (MT) Dávila, PhD, were the featured guests at the lecture, titled “Catholicism and Racism.”

Dr. DiLeo shared information about the Justice and Peace Studies program, along with backgrounds on both of the speakers. He also explained the structure of the evening’s event.

The night started with a lecture from Bishop Fabre on “Open Wide Our Hearts,” and was followed by Dr. Dávila’s statement on the document.

After they both concluded, each speaker was given the opportunity to respond to the remarks made by the other.

Fabre is the Bishop of the Houma-Thibodaux diocese in southeastern Louisiana. He is also the chair of the U.S. Conference of Catholic Bishops’ Ad Hoc Committee Against Racism.

“Open Wide Our Hearts” is the most recent of four Pastoral letters against racism issued by the U.S. Conference of Catholic Bishops (USCCB).

Before this document, a letter had not been issued since 1979.

“Each of these [letters] addresses the scourge and evil of racism, and each one is worthy of reading,” Fabre said.

“Open Wide Our Hearts,” however, was the letter that Fabre focused on explaining in his address. He included many quotes from the document, which extends the USCCB’s decades long attention to racial justice.

The formation of the document was prompted by the controversy surrounding the “Unite the Right” white nationalist 2017 rally in Charlottesville, Virginia.

Dr. Dávila, the second speaker at the event, is a lecturer of theology and religious studies at Merrimack College near Boston as well as the past president of the Academy of Catholic Hispanic Theologians of the United States.

Dr. Dávila has published several reflections on “Open Wide Our Hearts” in the past year, and she shared some of her thoughts on the document in her address.

She titled her comments given Tuesday night “Can We Use Conversion of Hearts to Dismantle the Master’s House?”

“This [title] is a play on words that brings Catholic Social Teaching’s emphasis on conversion of hearts in order to transform unjust structures together with the famous words from womanist thinker Audre Lorde, who questioned whether, on the issue of racial justice, it would ever be useful, or even possible, to use the laws, language and customs of the Master, that of white supremacy and privilege, to dismantle the Master’s House,” Dávila said.

Dávila said that she “has always had a hard time with Catholic Social Teaching’s insistence on conversion of hearts as the key to transforming structures toward greater justice and humanization,” as is the focus of “Open Wide Our Hearts.”

Dávila stated that the document is a step toward the “ongoing requirement of reconciliation that is a part of the Catholic tradition, and an essential requirement of the work for racial justice,” but it is not perfect and “often shies away from the kinds of explicit denunciations of current assaults to the human dignity of black and brown folk in this nation.”

The event concluded with responses from each speaker to the other’s statements, as well as with questions from the audience.

College of Nursing junior Emily Sanders attended the event because of her current frustration and confusion with the Catholic church’s stance on addressing racism today.

“I found Bishop Fabre helpful when addressing the internal work that all students must do, especially on a campus where a majority of students are white and have not experienced racism. I also found that Dr. Teresa was able to respectfully challenge the document and ask questions on how the church, businesses and universities and individual people can not only identify their racism, but work to dismantle the systems such as white supremacy that continue to be intertwined in our education, political and religious systems,” Sanders said.

The document “Open Wide Our Hearts” can be found on the USCCB’s website, usccb.org/racism. Dr. Dávila also included that her various published responses to the document can be found online by searching her last name.