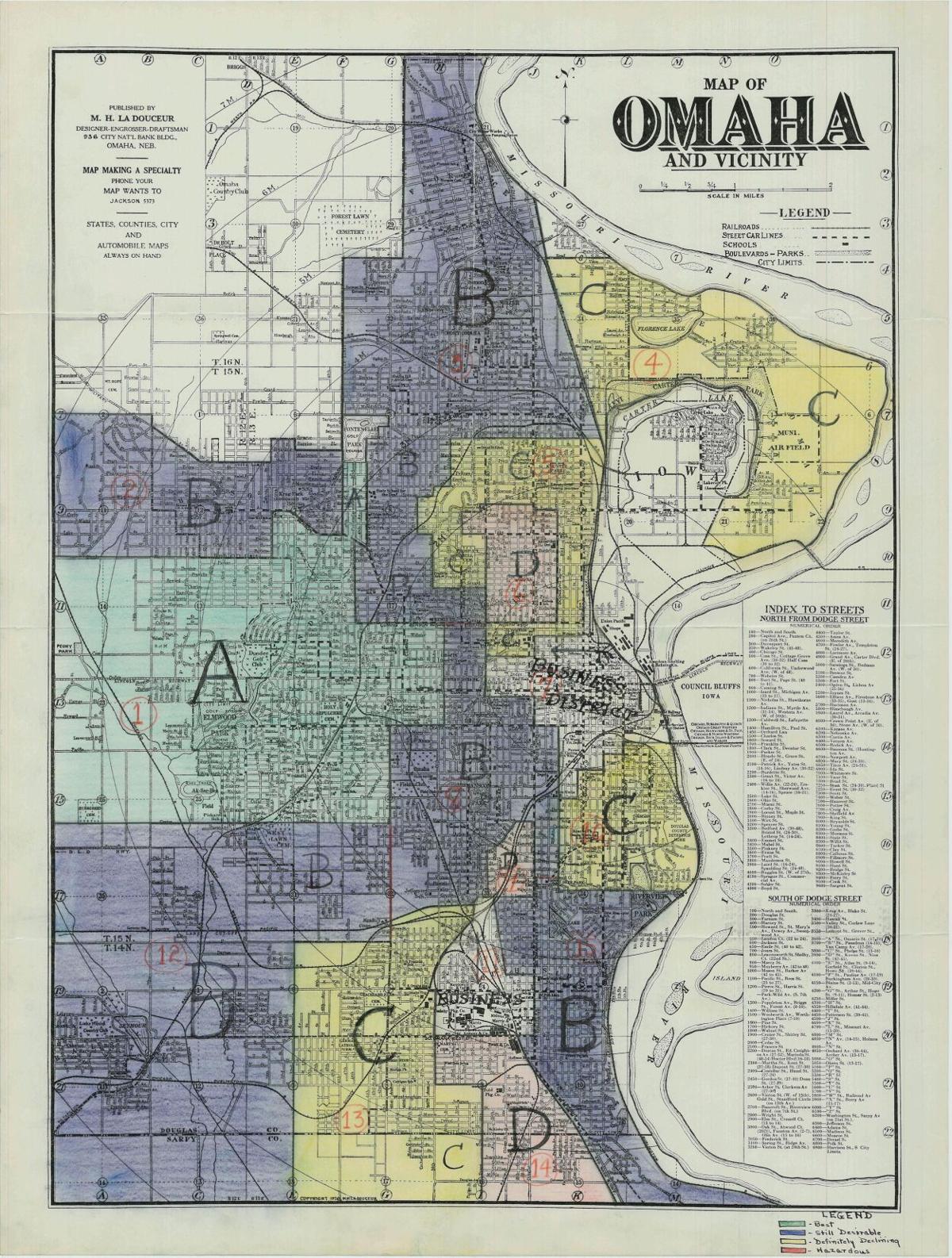 In the 1930s and beyond, Home Owners’ Loan Corporation maps assessed the risks of lending in different neighborhoods, allowing banks to discriminate based on race, class and ethnicity. This map of Omaha shows neighborhoods divided into green, blue, yellow and red zones with a key in the bottom right corner. 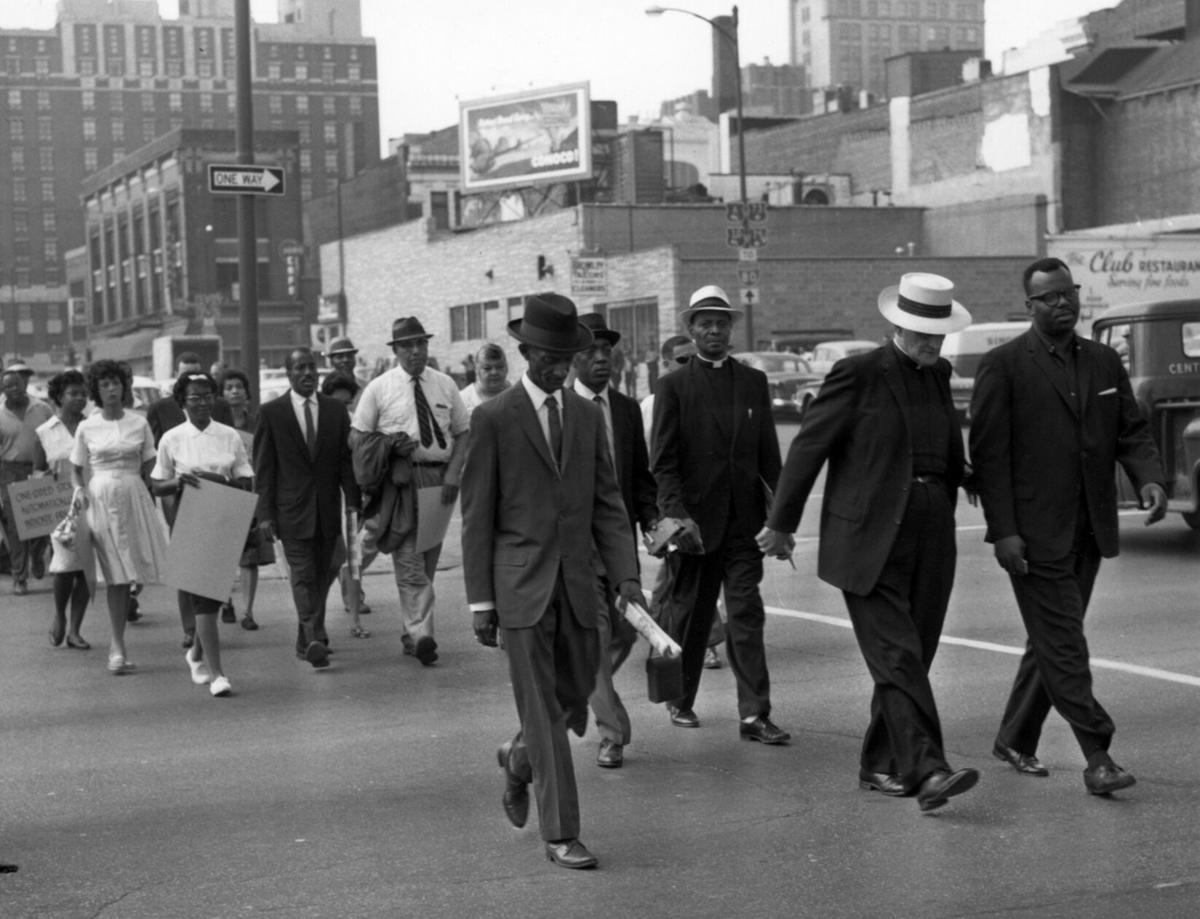 The Rev. John P. Markoe, S.J., wearing a white hat, participates in an Omaha march. In 1947, the Creighton priest started the DePorres Club, an interracial group that fought racial discrimination.

In the 1930s and beyond, Home Owners’ Loan Corporation maps assessed the risks of lending in different neighborhoods, allowing banks to discriminate based on race, class and ethnicity. This map of Omaha shows neighborhoods divided into green, blue, yellow and red zones with a key in the bottom right corner.

The Rev. John P. Markoe, S.J., wearing a white hat, participates in an Omaha march. In 1947, the Creighton priest started the DePorres Club, an interracial group that fought racial discrimination.

In an early map of the City of Omaha, Creighton University’s campus was highlighted in warning yellow – “definitely declining” – at the edge of a red “hazardous” block.

The disconnect between North Omaha, South Omaha and the rest of the city is a result of redlining, a process that normalized segregation in cities all over the U.S.

The reforms enacted by President Franklin D. Roosevelt as part of the New Deal throughout the 1930s were meant to create economic growth in the aftermath of the Great Depression, but the measures also led to systemic racism and generational consequences that persist today.

The New Deal prioritized home ownership, and the federal government developed a way to assess the risk of backing individual’s loans.

“Race was baked into the process of assessing risk,” said Alexzia Plummer, an exhibition guide at the Union for Contemporary Art.

The Creighton Intercultural Center showed the Union’s virtual tour of the “Undesign the Redline” exhibit at a series of events from Feb. 10 to 12. The showings were followed by a short discussion.

“It gives a better understanding of how North Omaha became North Omaha and how redlining has impacted the Omaha community,” said Curtis Taylor, assistant director of multicultural organizations and programming in the CIC, at the start of the Feb. 10 event.

The exhibit, currently available for viewing on the Union’s website, is broken into five parts: the history of redlining; a local look at the effects in Omaha, Lincoln and Council Bluffs; a timeline of American history; a living archive of local stories; and how to “undesign” the redline.

Home Owners’ Loan Corporation maps assessed the risks of lending in different neighborhoods in the 1930s and beyond, allowing banks to discriminate against specific ethnic groups, races and working class people.

The risk assessment for neighborhoods was done using surveys and descriptions of “environmental hazards” in different parts of the city, Plummer said. These “hazards” could include race, ethnicity and occupation.

Not only did this impact the ability of an individual to buy a home, but it would impact generations of people.

“If your family was denied a mortgage in the 1930s or the 1950s or the 1970s, then you may not have the family wealth or down payment help to become a homeowner today,” Plummer said. “In that way, the consequences of past redlining transcend time, even as new forms of it continue.”

It also impacted the services provided to the community. Money and services were funneled into the “better” neighborhoods, often home to white people, which led to other inequalities.

Plummer pointed to COVID-19 numbers in the areas of Omaha that were con- sidered “hazardous.”

That is compared to most zip codes in eastern Omaha, which generally have fewer than 2,000 cases and would have been marked with blue or yellow.

In the virtual tour, Plummer also described how interstates are used to bypass “hazardous” communities.

to be able to get into a city, work and then go home,” Plummer said. “So we declare certain areas in the city blighted, we tear down homes, and then we put interstates, highways, freeways through them.”

Creighton sits at the interchange of Interstate 480 and Highway 75. Highway 75 cuts right through North Omaha.

Racial justice advocate and former State Sen. Ernie Chambers is quoted in the exhibit, saying in 1985, “They said the North Freeway would promote economic development. But all it did was displace people from their homes, raise unemployment because of the loss of local businesses, and gave outside interest stronger control over the area.”

The final section of the exhibit offers ideas to “undesign” redlining and other systemic discriminatory processes: reframe the narrative; redesign spaces in the community; and reinvest money, time, resources and skills.

“That’s really the purpose and the goal of the exhibit is to have people think about community building and city planning and all these things in a different way, knowing what they know now about redlining,” Plummer said.

There was one strong Creighton connection in the exhibit: The role of the DePor- res Club in fighting against racial discrimination, including redlining.

The DePorres Club was led by the Rev. John P. Markoe, S.J., a priest at Creighton.

“He started an interracial group of young people to fight back against these things happening in Omaha,” Plummer said.

The group, started in 1947, was named after St. Martin De Porres, according to Creighton University Archives and archivist David Crawford.

“It sponsored plays, lectures and rallies in attempts to educate the public,” said a virtual archives exhibit. “Fr. Markoe and others helped Black families move into white neighborhoods, and club efforts led to the creation of Omaha’s first Black Catholic parish.”

Victoria Kaahaaina, a senior in the College of Arts and Sciences, said she learned about the DePorres club and the impact of interstates on the North Omaha community from attending the event.

“I think that it is an important topic for Creighton students to learn about because we are in North Omaha. We’re in an area that is discriminated [against], and by breaking that Creighton bubble we can better serve the community that we’re in,” Kaahaaina said. “We’re a part of the problem if we don’t recognize where we are in the Omaha community.”