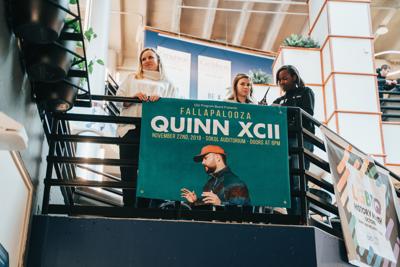 Creighton Students Union Program Board announced on Wednesday that the headliner for this year’s Fallapalooza is Quinn XCII, a singer and songwriter out of Detroit who combines hip-hop, pop, reggae and electronic dance genres in his music.

The concert will be held at Sokol Auditorium on Nov. 22. Creighton students are able to get free tickets through Program Board.

Quinn XCII has more than 7 million monthly listeners on Spotify and has played shows at several notable venues, including Red Rocks Park and Amphitheater in Morrison, Colorado, and Grant Park in Chicago for his set at Lollapalooza this Summer.

The artist has produced music with Louis the Child, Jon Bellion and ayokay, who played at Fallapalooza in 2018.

CSU Vice President for Programming Caitlin Mills and CSU Program Board Concerts Coordinator Matt Witzofsky have been working on Fallapalooza since the beginning of May and said they were excited to announce to the student body that Quinn XCII will be the headliner.

Mills said that students can expect a full house and a fun night with friends this year at Fallapalooza. Students can also expect to see a few exciting changes to the event, Mills said.

“Traditionally, Fallapalooza contains bothan opener and a headliner. This year, Matt [Witzofsky] and I decided to use our budget toward one well-known artist. Because of this change, the concert is starting one hour later than past years,” Mills said.

CSU Program Board will also be providing a photo booth with a themed backdrop for students to use at 8 p.m. when the doors open, until the show begins at 9 p.m. Students can look forward to the event as a way to take a break from school and spend time with friends.

College of Arts and Sciences Sophomore Wyatt Johnson said that he attended Fallapalooza last year, but he’s even more excited for the concert this year.

“I love Quinn XCII’s music and I think that [CSU] Program Board did a good job finding a performer that many Creighton students know of,” Johnson said.

“He played a great set and was so personable with the crowd, so I’m honestly incredibly excited for Creighton to be able to see him perform live. When Caitlin [Mills] told me that CSU Program Board was bringing Quinn [XCII] for Fallapalooza, I nearly lost my mind. I know how many Creighton students enjoy his music, so I am really proud of the team for being able to bring him to campus,” Shahbazi said.

Mills said that just 3 1/2 hours after the announcement of the headliner on Wednesday, 994 tickets had been sold. The event capacity is 1,400 people.

“Based on these results, Matt [Witzofsky] and I foresee this being one of the biggest Fallapalooza concerts that CSU Program Board has ever hosted,” Mills said.

While tickets are free for Creighton students, guest must buy one for $10. Students and guests can visit http://bit.ly/FallapaloozaTickets to get their tickets. The doors at Sokol Auditorium will open at 8:00pm on Nov. 22. Shuttles at the Gallagher fountain will be available throughout the evening to transport students from campus to the venue.