You are the owner of this article.
Edit Article Add New Article
Home
News
Opinion
Scene
Sports
Print Edition
1 of 3 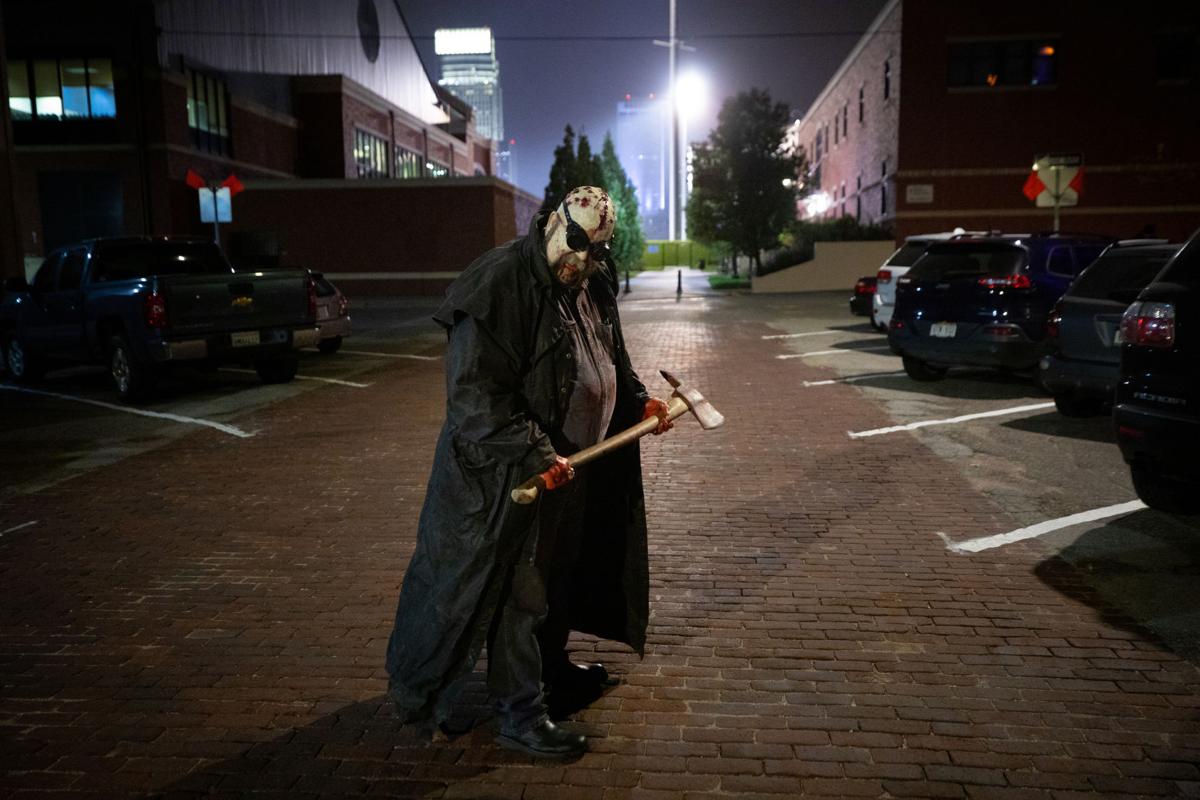 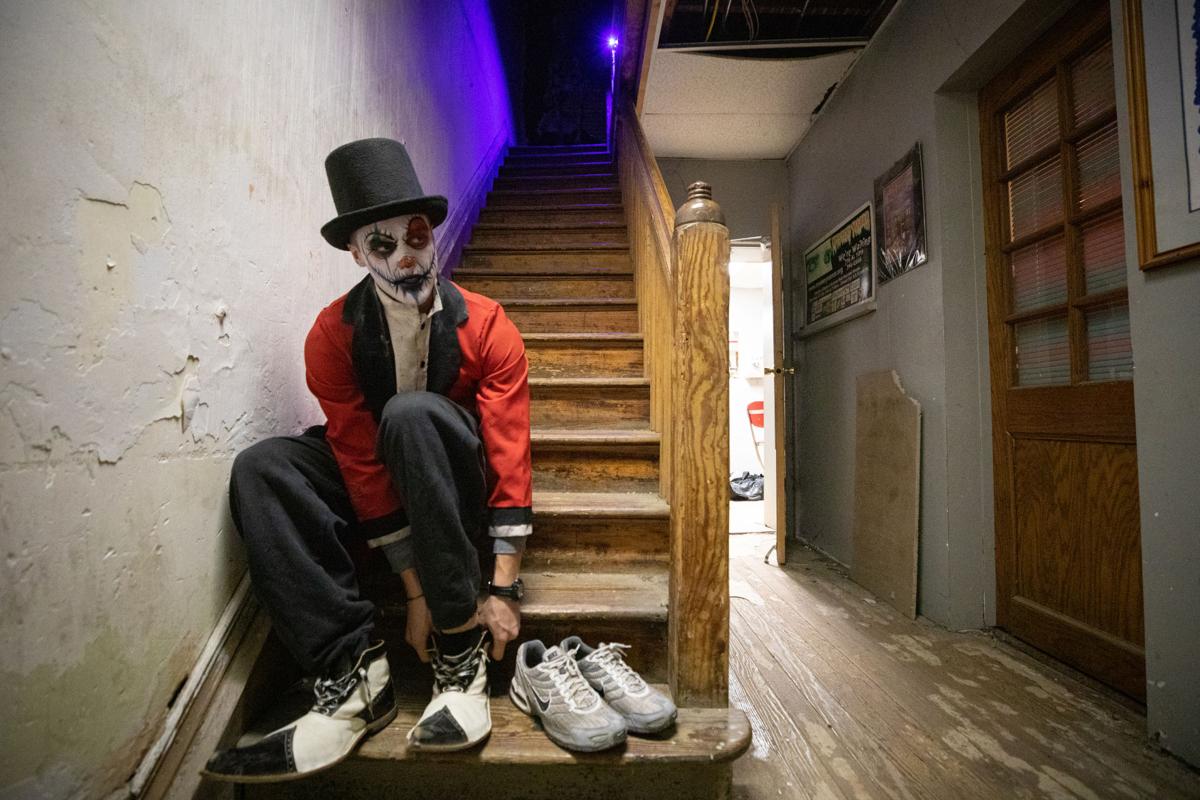 Donnie Foster changes into clown shoes on a back staircase before the doors open at Mystery Manor in Omaha on Sunday, Oct. 27, 2019. 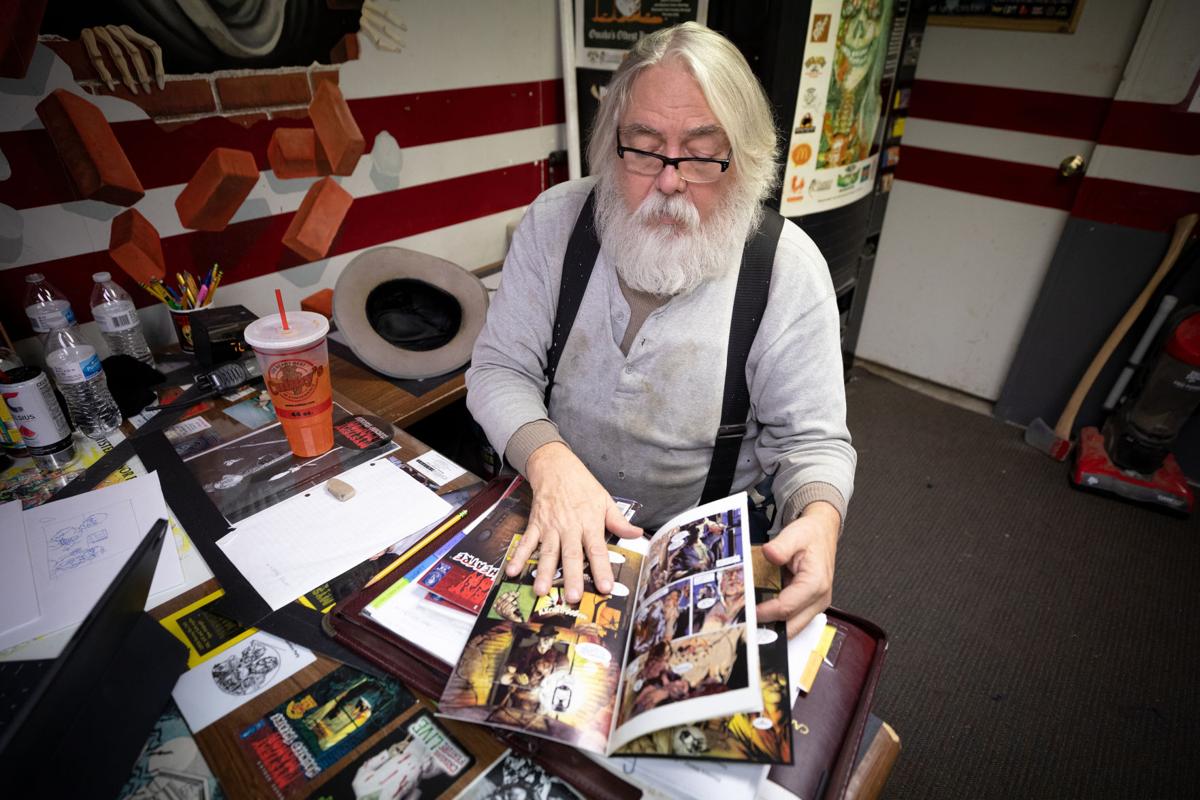 Donnie Foster changes into clown shoes on a back staircase before the doors open at Mystery Manor in Omaha on Sunday, Oct. 27, 2019.

The house lays quiet for 11 months of the year, snuggled between the modern buildings of Creighton University and an industrial complex.

At dusk, for 31 nights a year, the house comes to life with zombies, mad scientists, clowns, and the ghost of Greta Hall.

Mystery Manor, as the house is now called, serves as one of Omaha’s oldest Halloween attractions at the end of its 36th season.

Mystery Manor is the vision of Wayne Sealy and two of his friends.

Built in 1886, the house that stands on 18th and Burt streets has taken many forms. What was originally a house built for a family became vacant after six days because of the death of their daughter.

It was later transformed into a prostitution house and then a tuberculosis ward. The building was abandoned for many years until Wayne and his two friends came upon the building in 1982.

They were looking for a house to turn into a haunted house. The 96-year-old, 4500-square-foot house was ramshackle on the inside but had a strong foundation. The house seemed to fit the bill for a house of horror.

“It was a condemned building. We had to kick the door in to get in. Two-foot-high full of garbage and passed-out people inside,” Wayne, 71, said. They bought the house that day and spent the whole next year cleaning it up.

The old brick building was going to be transformed into a haunted house.

Wayne, a retired staff sergeant from the Air Force, and a graphic designer and cartoonist for the Omaha March of Dimes’ haunted house, wanted to have his own house.

With twists and turns, ups and downs, animatronics, projections and a scare around every corner, Mystery Manor is not your typical haunted house. There are three stories of themed rooms, such as the swamp, clown-alley, the black hole and the slaughterhouse, to name a few.

“We are trying to transfer away from a haunted house into a haunted theater and it has taken 36 years to get to this point. If you look nation-wide, you won’t see another house like ours,” Wayne said.

The physical house is not what makes the Mystery Manor so unique. It is the people who fill the secret hallways and hidden doors that give life to the house.

“If I have anything that makes this house special it’s the interplay between the public and the actors. If you have actors that can engage with people, then you have magic,” Wayne said.

Mystery Manor’s first season consisted of 12 cast members. Today, there are over 50 cast members who transform into characters that eat human parts, run mad in the insane asylum and lurk in the shadows. With skin hanging from their faces, ax wounds deep in their skulls, reversed pentagrams burned onto their foreheads and fake blood everywhere, the realness of the actors transport you to a different world.

Before the sun sets, deep in the heart of the Mystery Manor, cast members sit on old duct-taped barber chairs getting their makeup done and changing into their costumes. Husbands and wives visit their loved ones who are getting ready while their kids run around grinning cheek to cheek with rubber snake in their hand. There is an undeniable feeling of community as they actors get ready for their show.

“There just seems to be a community of the independent entertainer. We all have our own separate communities and yet it is still the same spirit of doing things ourselves,” Sarah Whitaker, 37, said. The actors at Mystery Manor come from different backgrounds and professions but have an interconnectedness with their love of acting.

Alex Davidson, 20, has been acting at the house for five years. “When I first started coming here, I was a depressed teenager, not really doing anything productive with my life. This place really taught me to get over that and was an outlet for me. It’s like a family here.”

The family aspect can also be seen between actors and the technicians who keep the house running.

Lyssa Hernandez, 16, a junior at Central High School, was introduced to Mystery Manor by her father, Martin Hernandez, who is a technician at the house. Lyssa acted for a few years and then found her new passion: makeup artist. “I didn’t get a chair until last year. It was more of a ‘oh my god this is fun,’” Lyssa said.

Wayne now runs Mystery Manor with his two sons, Mark and Matt, who staff the ticket window/accountant and manage/act respectively.

“Wayne’s determination to keep this house is what makes him so special. This gives him his absolute delight in this world. You can tell his heart sings every year when you see him,” Whitaker said.

Sorry, there are no recent results for popular articles.