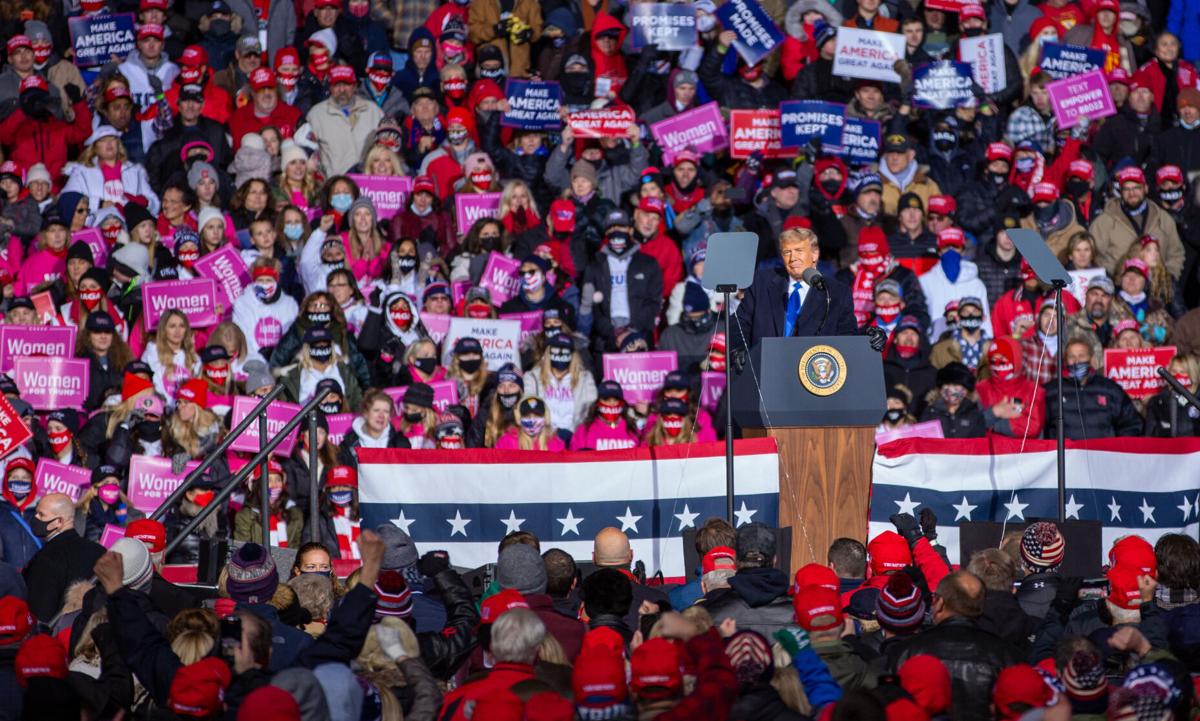 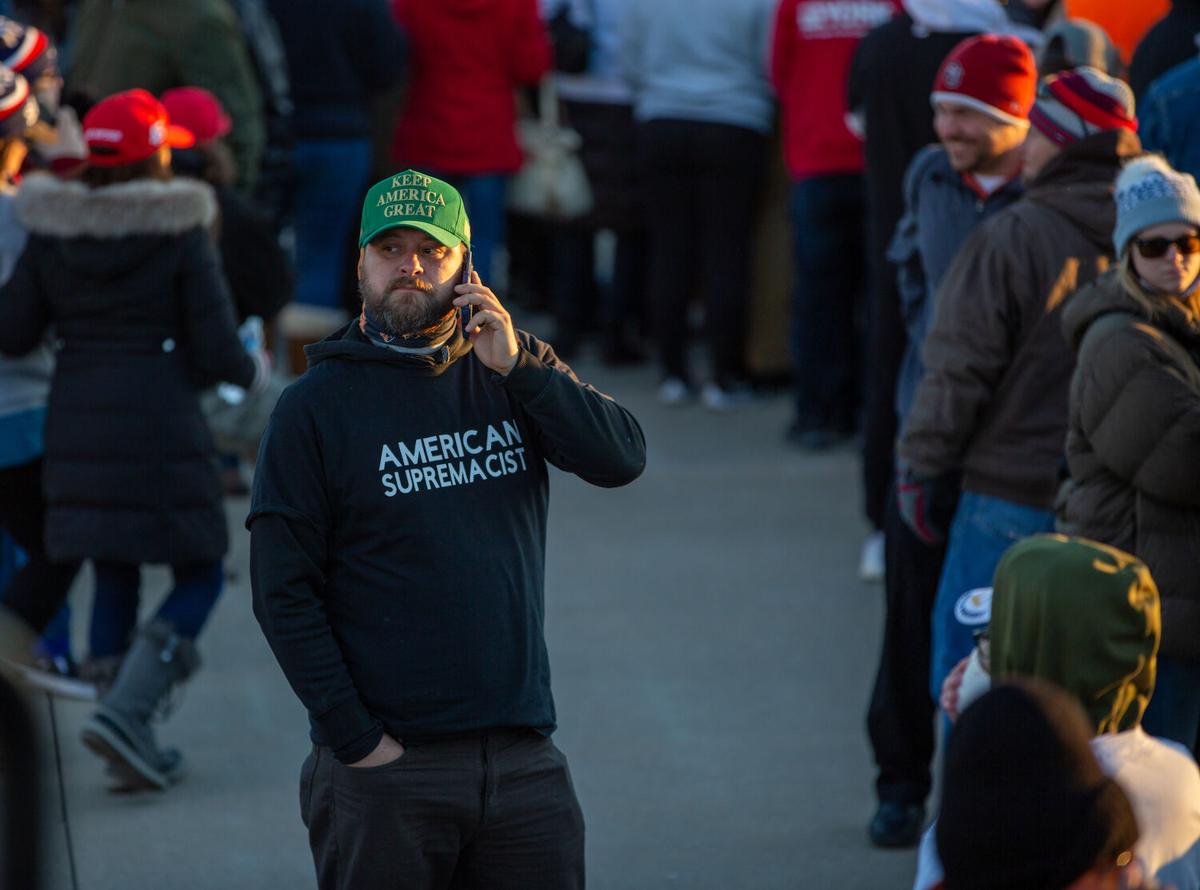 An attendee at the rally wears a hat that reads, "Keep America Great" and a T-shirt that says, "American Supremacist." Many supporters wore Trump campaign merchandise and carried signs. 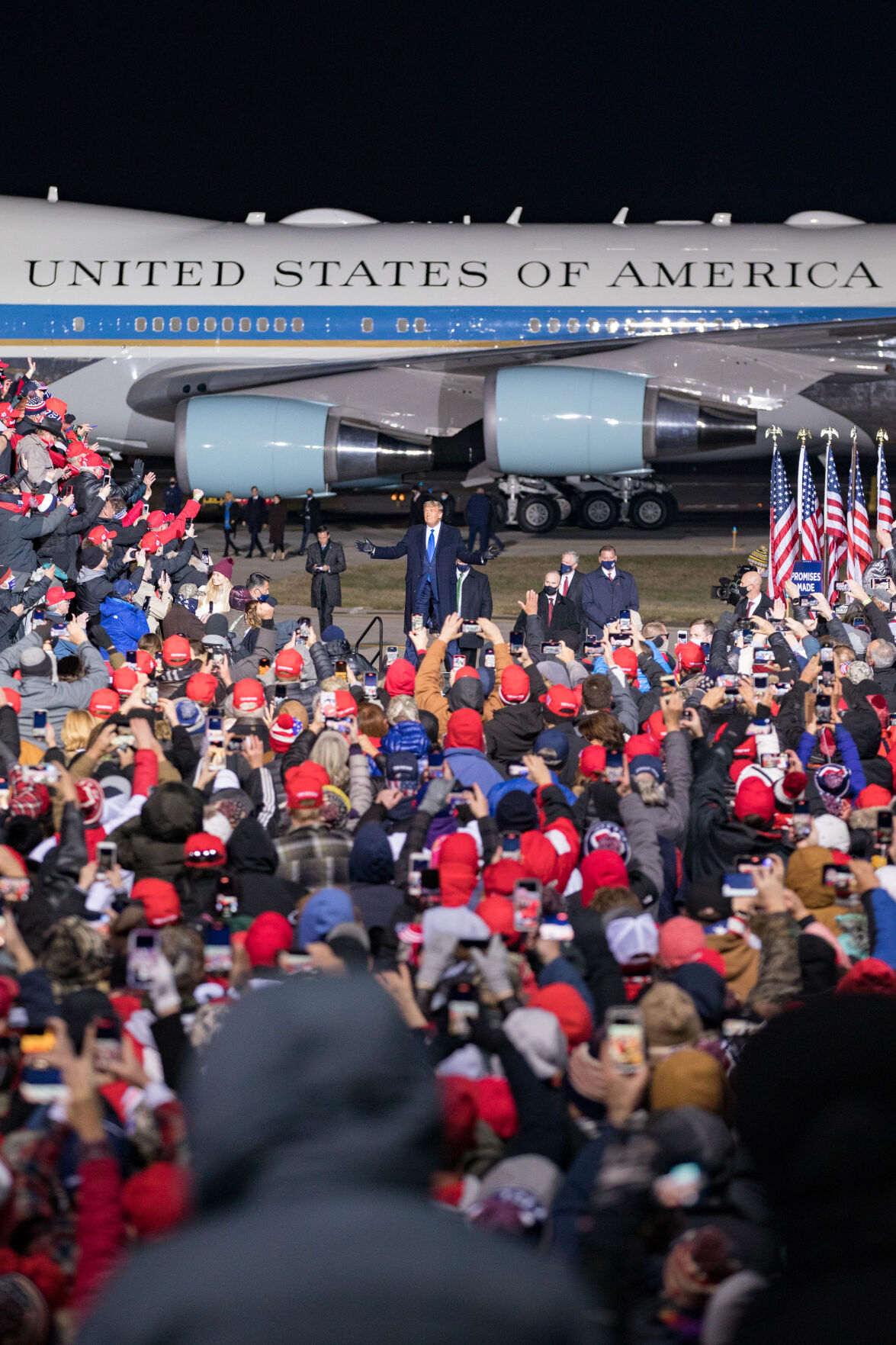 An attendee at the rally wears a hat that reads, "Keep America Great" and a T-shirt that says, "American Supremacist." Many supporters wore Trump campaign merchandise and carried signs.

President Donald J. Trump promised a coronavirus vaccine and spoke about helping Midwestern farmers at his stop in Omaha on Tuesday night for a rally at Eppley Airfield.

Omaha, part of the state’s 2nd Congressional District, and neighboring state Iowa both have electoral votes that could potentially swing blue.

Nebraska splits its electoral votes, and Trump said he is not worried about where the rest of Nebraska’s five votes will go.

“We are going to win Nebraska,” Trump said. “I didn’t really have to be here, but it’s nice to be with friends.”

Thousands gathered outside in the cold to hear the president speak. The rally was scheduled to begin at 7:30 p.m. Air Force One touched down at 7:51 p.m., and Trump spoke to the crowd shortly after.

“I am standing here freezing,” Trump said. “I ask you one little favor. Get the hell out and vote.”

Trump mentioned top Nebraska and Iowa Republicans during the event, saying of Fischer: “She is my favorite senator from the State of Nebraska.”

Sen. Ben Sasse, R-Neb., was not mentioned at the event. He has been critical of the president in the past.

Most recently Sasse said during an October telephone town hall, first reported by the Washington Examiner, that Trump “kisses dictators’ butts,” “sells out our allies,” and has “flirted with white supremacists.”

Trump also spoke into the crowd to Ricketts, calling him a “great governor” and asking him how the state was doing.

Nebraska has seen a steady increase in the rate of positive tests since the beginning of October, according to the state COVID-19 dashboard.

Hospitals in the Omaha metro reported an occupancy rate of 83% on Tuesday, and Douglas County raised the risk level of coronavirus spread to “severe.”

Trump, however, said the U.S. is “turning that corner.”

He also said that the U.S. is on track to deliver 100 million doses of a vaccine, though University of Nebraska Medical Center experts say it is unlikely a vaccine will be approved before the end of the year, and even then, distribution will take time.

“We’re all set logistically. Our military is going to deliver it,” Trump said. “It’ll be done very quickly.”

UNMC epidemiologist Dr. David Brett-Major said in an Oct. 6 article published to the UNMC website that even companies who have entered Phase 3 of vaccine trials are unlikely to have it approved by the Food and Drug Administration by the end of the year.

Johnson & Johnson recently had to pause its vaccine trial but announced on Oct. 23 that it “is preparing to resume recruitment” for Phase 3.

“We need to wait for sufficient data before even an emergency use authorization from the FDA could be granted,” Brett-Major said in the article. “There is little chance that will happen by the end of the year.”

Trump also touted the U.S.-Mexico-Canada Agreement, which went into effect on July 1, saying it would keep businesses from leaving Nebraska and Iowa.

The U.S. Department of Agriculture gave $28 billion in subsidies to American farmers between 2018 and 2019.

“When China targeted our farmers, I delivered $28 billion to our incredible farmers here in Nebraska and Iowa and all across the country,” he said.

The aid was given to farmers to relieve losses from retaliatory tariffs during an ongoing trade war between the U.S. and China.

Trump said during the event that there were 29,000 people in attendance on Tuesday night, but police chief for the Omaha Airport Authority Tim Conahan said just more than 21,000 people were screened into the event, according to the Omaha World-Herald.

Shortly after his remarks were concluded, Trump took off on Air Force One.

According to the Omaha Police Department, however, hundreds of his supporters were left stranded in nearly freezing temperatures for up to three hours as they waited for buses to transport them back to distant parking lots.

Omaha Police spokesman Michael Pecha said that several individuals were hospitalized or received on-site medical attention because of complications from the cold weather.

Omaha Mayor Jean Stothert said in a press conference on Wednesday that the Trump campaign was responsible for coordinating transportation for attendees to and from the event.

Trump’s deputy national press secretary Samantha Zager said in a statement on Wednesday that the delays were caused by traffic delays and local road closures.

“President Trump loves his supporters and was thrilled to visit Omaha last night. Despite the cold, tens of thousands of people showed up for his rally. Because of the sheer size of the crowd, we deployed 40 shuttle buses instead of the normal 15,” Zager said.

“We always strive to provide the best guest experience at our events, and we care about their safety.”