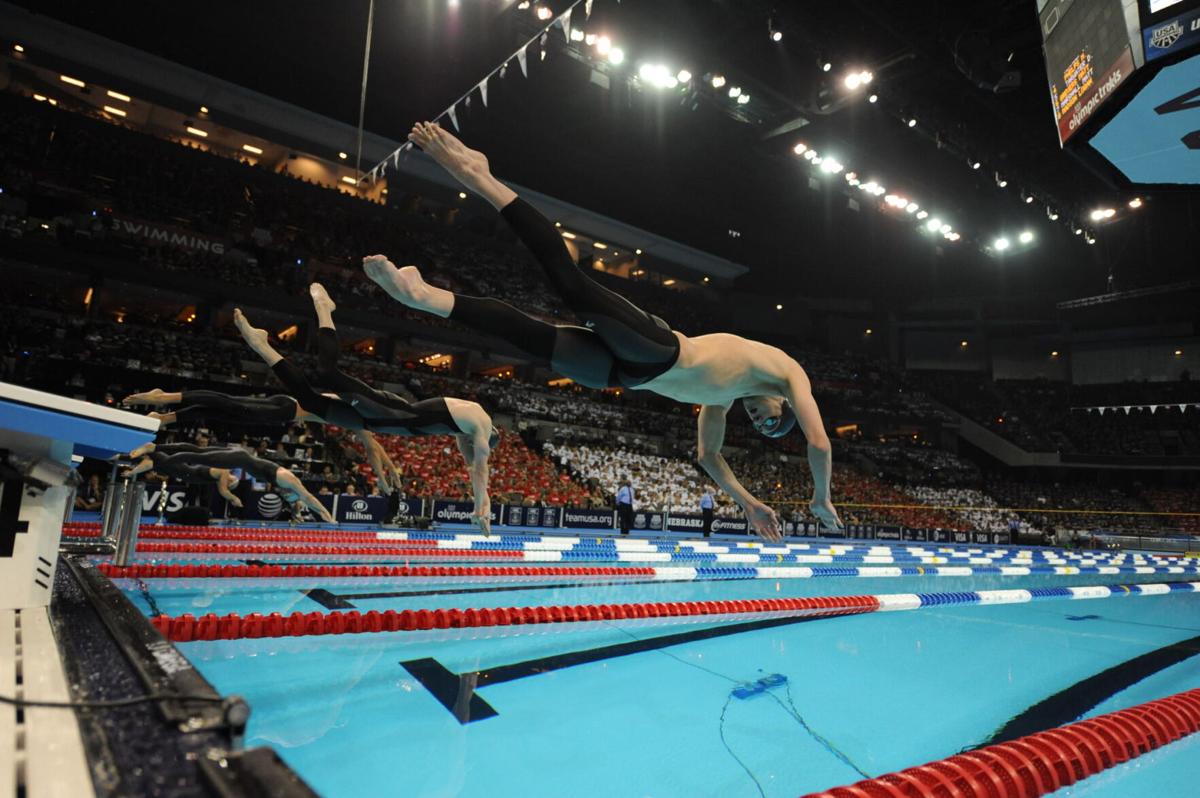 Swimmers dive into the competition pool at the CHI Health Center during the 2016 Olympic Swim Trials.

Baseball fans pack TD Ameritrade Park during the 2019 College World Series, which totaled more than 330,000 attendees. This year’s series was one of many sporting events canceled because of the coronavirus pandemic.

Swimmers dive into the competition pool at the CHI Health Center during the 2016 Olympic Swim Trials.

Baseball fans pack TD Ameritrade Park during the 2019 College World Series, which totaled more than 330,000 attendees. This year’s series was one of many sporting events canceled because of the coronavirus pandemic.

Losing four big-name athletic events since March because of the pandemic, the city’s economy and culture took a hit.

Coming in a string of announcements, the NCAA’s decisions pulled three major events from MECA’s facilities, all of which have been well-attended in the past and, at times, have broken NCAA attendance records.

“Fans certainly turn out, especially when their hometown teams are national champion contenders,” Engdahl said. “If history were to repeat itself, we certainly would have had a promising show out.”

Operating on a bid system, the NCAA schedules its tournaments years in advance, meaning the first rounds of March Madness and this fall’s volleyball tournament will not be rescheduled.

Outside of the arena, the NCAA’s cancellation of spring athletics quickly put a halt to the annual College World Series, which has become an important part of the city’s summer culture.

“Omaha and the CWS really go hand-inhand and have created a legacy significant to many individuals,” Engdahl said. “You have visitors, people who are baseball fanatics and have the CWS on their bucket lists, all making the trip to Omaha.”

With those fans, visitors, teams and the city in mind, the College World Series of Omaha is preparing for next summer.

“We’re being optimistic, we’re trying to move forward and doing the normal planning as we would, but also throwing in some contingencies and talking about what it might look like,” CWS marketing and events manager Amy Hornocker said.

A typically popular event for families, visitors and businesses, Omaha natives felt the loss this June, and Hornocker says it’s hard not to reflect on the missed opportunities of not hosting another historic series.

The 2020 series, which would’ve been the 10th held at TD Ameritrade Park, was expected to draw $70 million to the city.

“It’s really hard to do much of anything down in this area right now, you’re almost 100% event-driven,” said Kevin Culjat, the owner of Rocco’s Pizza and Cantina and Lefty O’Tooles. “It was a huge summer lineup, and we lost that.”

His businesses, across the street from TD Ameritrade Park, draw event goers from MECA’s facilities, and with what he says is a strong reputation, the restaurants rely on that traffic.

Overlapping with the College World Series, the U.S. Olympic Swim Trials are becoming a premier part of the Omaha sports world every four years.

Josh Todd, president and executive director of the Omaha Sports Commission, compares the event to “Omaha’s Super Bowl,” drawing 1,500 swimmers, hundreds of coaches, and thousands of fans, volunteers and media from across the country to the CHI Health Center.

“It’s such a huge event, only 50 of those athletes make it to the Olympic team,” Todd said. “For most of these swimmers, it is their Olympics. It’s the pinnacle swim meet that they’ll ever make in their careers.”

Unlike the other changes Omaha sports faced, the swim trials were moved to next summer, leaving the sports commission to prepare for June following months of adjustments.

“It was a lot of work and was tough to keep it, moving an event of this size that takes years to plan was a challenge,” Todd said. “We’re carefully optimistic that we’ll be able to pull it off, and we’ll make adjustments as needed.”

As the city’s sports world moves on with questions about what’s ahead, Omaha and its organizations are cautiously looking forward with hopes to make 2021 just as big as what was expected in 2020.