Skip to main content
You have permission to edit this article.
Edit
Home
News
Opinion
Scene
Sports
Print Edition
1 of 8 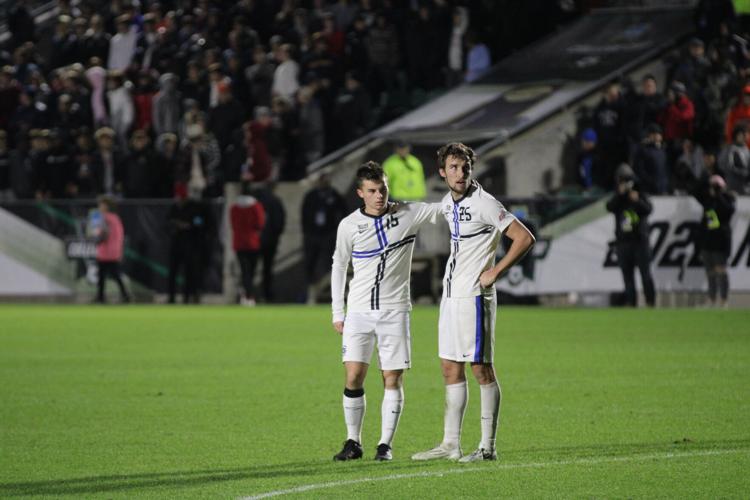 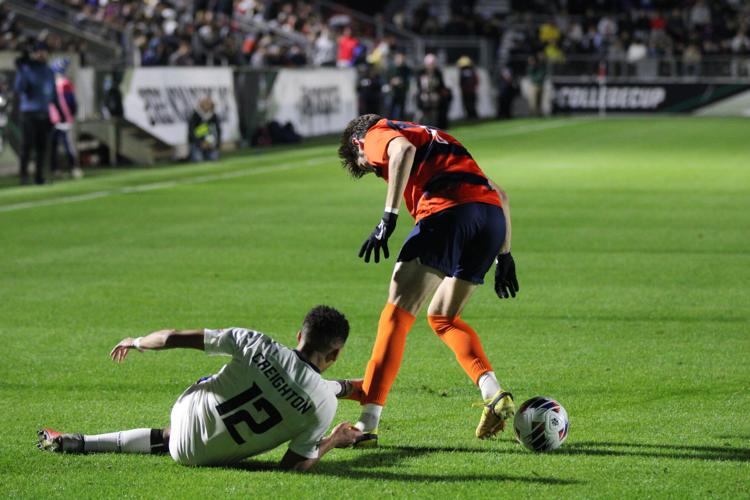 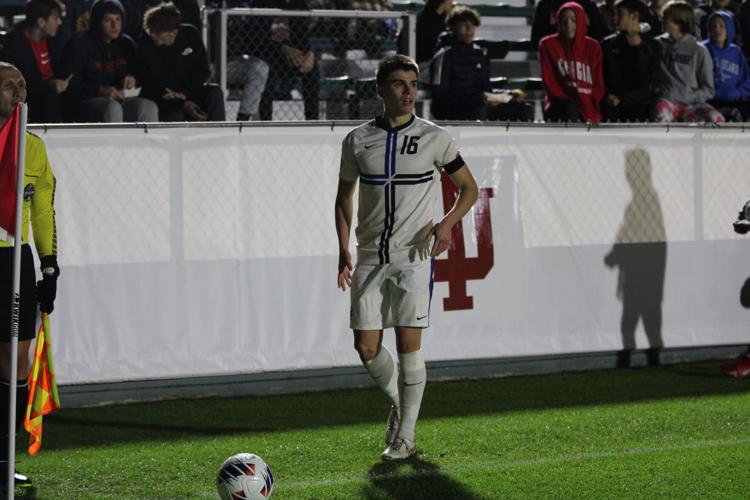 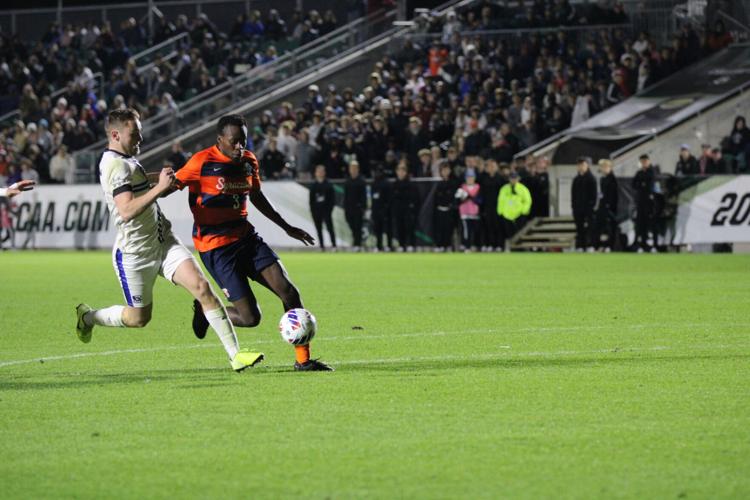 Junior forward Duncan McGuire scores the Bluejays' first goal of the game. McGuire is the leading scorer in the country. 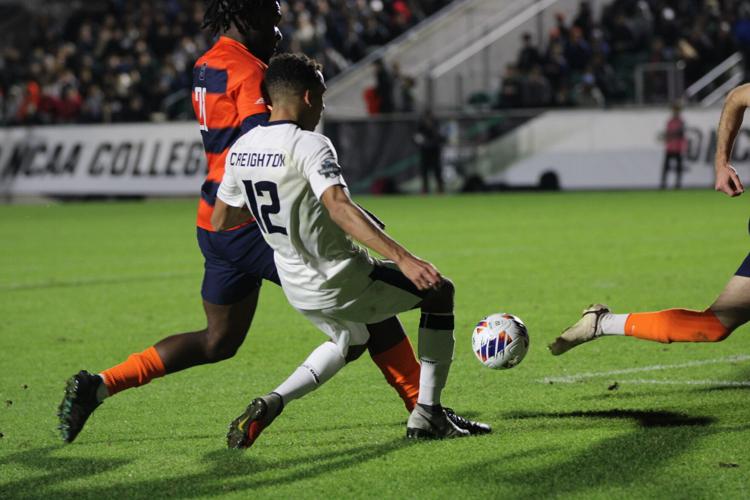 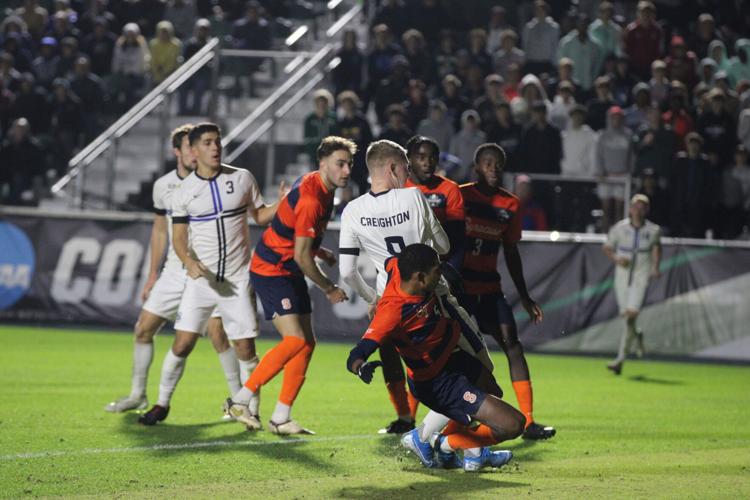 Senior forward Alfie Pope watches his game-tying goal hit the back of the net against Syracuse. Pope had just subbed in for the injured Duncan McGuire. 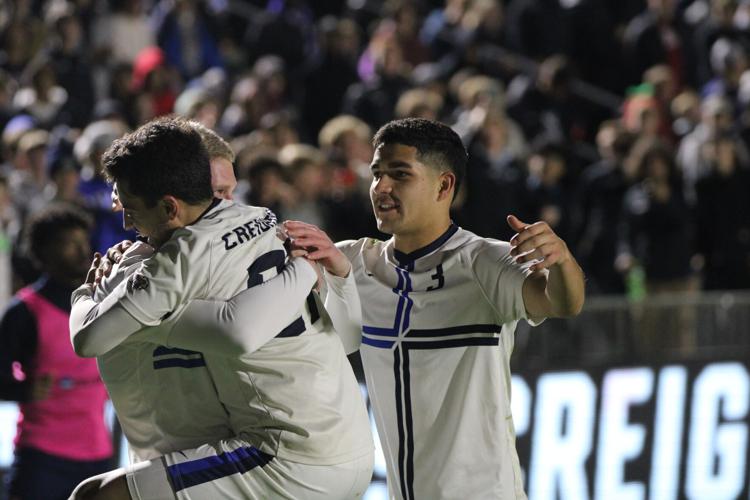 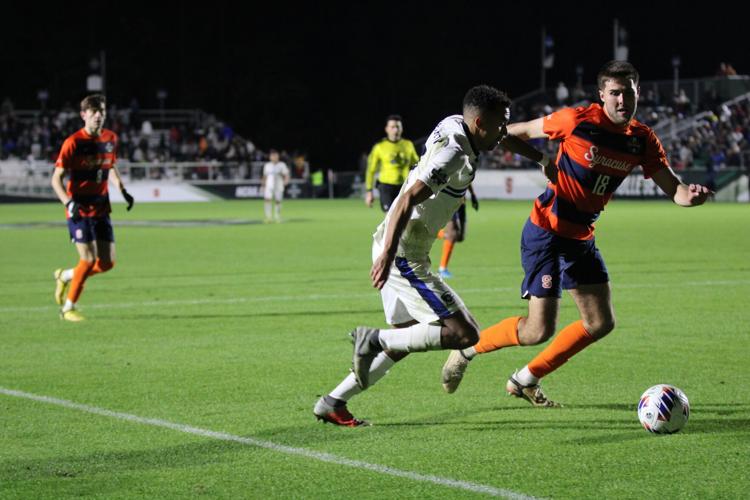 The Creighton men’s soccer team fell in heartbreaking fashion following a late goal by the Syracuse Orange, ending their NCAA run and, subsequently, their season with a 13-5-6 overall record.

The energy was electric in Cary, North Carolina as the Semifinals got underway, the only thing standing between the Bluejays and a spot in the NCAA College Cup finals match was the 17-2-4 Syracuse Orange.

Early in the half, the Bluejays controlled possession and played with an upbeat tempo- led by MAC Hermann Trophy nominee Duncan McGuire- that extended throughout the match.

In the 9th minute, junior forward McGuire, the nation's leading goal scorer, took his first of seven shots, but Syracuse’s goalkeeper was able to get a hand on it. Minutes later, another shot by McGuire, aimed towards the bottom left of the net, was met by a swarm of Syracuse defenders who blocked the ball before it reached the back of the net. In the 16th minute, McGuire took a third shot, which soared just wide left of the goal. Although Creighton controlled the pace, the match remained scoreless.

On the defensive side of the pitch, fifth-year senior goalkeeper Paul Kruse and the backline continued to play solid defense, keeping the high scoring Orange at bay and giving the Bluejay offense even more opportunities to counter and take advantage of their frontline skill.

Just past the midway point of a highly contested first half, senior midfielder Callum Watson, trying to convert on a set piece, barely missed as the ball careened off the top left of the Syracuse crossbar.

As the final minutes of the first-half ticked down, Syracuse converted on a corner kick. On the high-arching Orange kick from the left corner, goalie Kruse leaped to make the save, surrounded by players from both teams. The ball ricocheted off his hands and to the ground where it was recovered by Syracuse and sent into the back of the net for a lead of 1-0.

Creighton just missed their chance to equalize in the 41st minute, as McGuire pushed his way into the right side of the eighteen-yard box, spinning around and losing his defender before shooting one-on-one with Syracuse’s goalkeeper, who batted the ball out of play.

At the end of a fast paced and exciting half, the Bluejays trailed 1-0.

Five minutes into the second half, McGuire evened the match 1-1. Following a long pass from senior midfielder Callum Watson, McGuire sprinted down the right side of the pitch with a defender draped over his back, keeping control even as Syracuse’s goalkeeper rushed out to meet him. In midair, McGuire flicked the ball with his left foot from just outside the eighteen-yard box, the ball dribbling past the goalkeeper and into the left corner of the net.

“We knew we could create those opportunities and it was only a matter of time before they started to fall,” McGuire said.

But just 91 seconds later, Syracuse retook the lead, as a Creighton turnover near midfield was threaded in between two Bluejay defenders, leaving Kruse alone against the Syracuse player. Kruse couldn’t save the shot in time and the Bluejays found themselves once again trailing 2-1.

In the 63rd minute, McGuire injured his shoulder after going for a fifty-fifty ball and getting landed on by the Syracuse defender. McGuire was subbed out of the match and fifth-year senior Alfie Pope came into the match to replace him.

Less than a minute after being substituted in, Pope equalized the match at 2-2. As Watson threw the ball long-range into the eighteen-yard box, junior defender Luke Mitchell jumped in the air and headed the ball to the ground in front of the goal. The loose ball landed near Pope’s foot who shot from close range to find the back of the net.

The deciding goal, however, came on a dangerous Syracuse offensive possession. The Orange ran down the right-side of the pitch, approaching the eighteen-yard box. As sophomore defender Miguel Ventura was knocked on his back after receiving heavy contact in the box, the Syracuse offense sent a low pass across the box, where it was redirected and sent past Kruse into the back of the net for the 3-2 lead.

Despite good looks from the Creighton offense, the Bluejays couldn’t convert in the final five minutes, ending their NCAA tournament run after falling to the Orange 3-2.

“I’m upset we lost but, of course, it's great to be here at the College Cup,” senior midfielder Dominic Briggs said. “It just hurts because I know we could have done more and it's just unfortunate we didn’t get it this time.”

Torres felt similar about the match, but expressed his hopes for the team moving forward.

“In my opinion there’s no better way to learn than experiencing, and this experience, although it hurts, is a lesson that we can learn from,” Torres said.“It hurts tonight, it will probably hurt tomorrow, and the next day, but we’re going to learn from it and move forward.”

Coming off such an impressive run, Torres also commented on what he wanted the nation to know about the Bluejays as a team and as an institution.

“We’re not the underdogs; we’re not ‘giant killers’; we are an established program,” Torres said.“We are one of the giants in the country and this is our sixth cup in thirty years, so I don’t like to think of it as underdogs. We don’t play with a chip on our shoulder, we play our brand of soccer.”

Even though the road to the College Cup Semifinals was seen as unexpected by many, it was expected in the Bluejays locker room, a standard that Johnny Torres and the staff hope to continue to develop into next season and beyond.