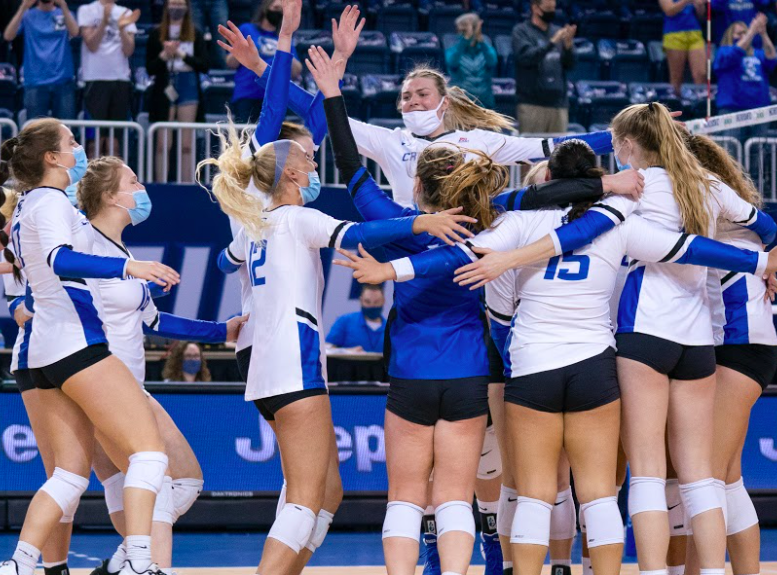 Kiara Reinhardt and team celebrate following the Jays’ victory over Marquette in the Big East championship. Reinhardt tallied eight kills and 11 blocks in the match. 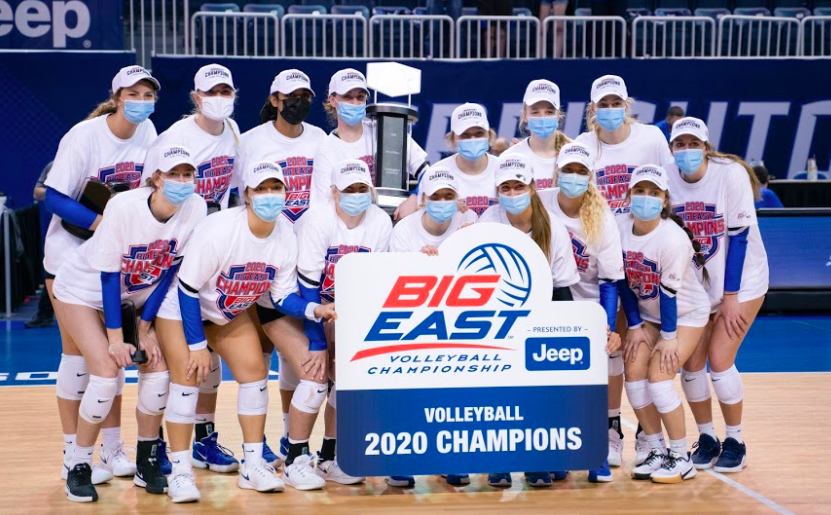 Kiara Reinhardt and team celebrate following the Jays’ victory over Marquette in the Big East championship. Reinhardt tallied eight kills and 11 blocks in the match.

Coming back from as many as seven down in the second set, the Jays put together a quick comeback to go up 2-0.

“We were very resilient, we’re a type of team that never gives up on any point,” sophomore outside hitter Keeley Davis said.

Davis, who notched four kills in the set, led in the category. She and junior middle blocker Annika Welty each marked 12 over the three sets.

Defensively, the Bluejays held a 58-38 digs edge over the Huskies.

“We made some really impressive plays either defensively or offensively to give ourselves a shot so that was really good to see and it was a variety of players,” coach Kirsten Bernthal Booth said.

She noted in particular the work of Davis, freshman middle blocker Kiara Reinhardt and junior outside hitter Jaela Zimmerman.

The versatile play was a theme throughout the match as the Jays’ 10-3 run in the third set pushed them to a victory in the final set.

“For us to be good we have to distribute the ball all over the place and when that starts to happen I think we’re pretty formidable,” Booth said.

With a conference title and a tournament bid on the line, the Bluejays faced Marquette in Saturday’s championship.

The Golden Eagles, coming off their own sweep in the semifinals over St. John’s, started the first set with momentum to win 25-18.

A back-and-forth third set included nine set points as the Bluejays battled back from 24-21 down to take the set 31-29 after a Welty block.

Facing those set points, senior middle blocker Naomi Hickman, who was named the tournament’s Most Outstanding Player, said they group wasn’t afraid to take risks as they came from behind.

“We really just talked about focusing on what we could control and really just being locked in on our side of the net,” Hickman said.

Opening with a 5-0 lead to start the fourth set, the Bluejays kept the momentum high with 17 kills before a final one by Hickman to earn the Bluejays the conference title. “It was a high quality match, but we played a really great match,” Booth said.

The conference championship couples with all-tournament team honors for Reinhardt, Hickman and Welty.

The win also grants the Jays an automatic bid into the NCAA Tournament in Omaha where they’ll play Morehead State on Wednesday.